One hundred years ago this week, Grace Kingsley interviewed D.W. Griffith and he did his best to sell his current release:

David Griffith, producer of Intolerance, which is hailed as the greatest motion picture ever made, wants it distinctly understood that Intolerance isn’t ‘high-brow,’ in spite of all its historical atmosphere and embodying of historical fact. Mr. Griffith smiled his quizzical, enigmatic little smile, the other night, as he explained that he himself had some horrible doubts that it might be ‘high-brow’ until he found that ‘Kid’ Broad and ‘Spike’ Robinson, honorable prize fighters both*, to use their own phrase ‘just ate it up’. ‘Really, the main interest is the love story,’ said Mr. Griffith.

Kingsley pointed out how shrewd he was calling it Intolerance, so nobody would dare to attack it for fear of being labeled intolerant, and Griffith laughed and answered “Well you said that. I didn’t.”

He complained that the film wasn’t getting enough publicity because corporation-owned magazines were making excuses not to write about it and only three publications were printing stories. This simply wasn’t true, but Kingsley was too polite to say so.

Kinglsey’s favorite film this week was The Heir to the Hoorah (the Hoorah was a mine). She wrote “if you want to see a picture thoroughly human, charming and natural, yet holding enough of the unusual in plot to add a stimulating sauce piquant, you must view The Heir to the Hoorah.…Miss King, as the young girl whose society mother goes husband hunting for her, reveals a depth of sincerity and an understanding of dramatic values which she has had no opportunity heretofore to display. There are no false notes…Thomas Meighan is strong and effective as ever in the role of the rough young millionaire mine owner who marries for love.”

Several of the people who worked on Heir went on to successful careers: its director William C. de Mille made some fine dramas in the 1920’s including Miss Lulu Bett (1921); its cinematographer Charles Rosher shot Mary Pickford’s best films as well as Sunrise (1927), then he became an expert in Technicolor and shot many films for M.G.M including The Yearling (1946) and Show Boat (1951); and Thomas Meighan was a major leading man of the 20’s. But the least well-known of the people involved also had an interesting life. Anita King was a former racecar driver. In 1915 she had become the first woman to drive alone cross-country from Hollywood to New York City; the publicity stunt for Paramount Pictures took 49 days. She quit acting in 1919, married twice and became a thoroughbred racehorse owner.

An incomplete version of Heir is preserved at the Library of Congress. 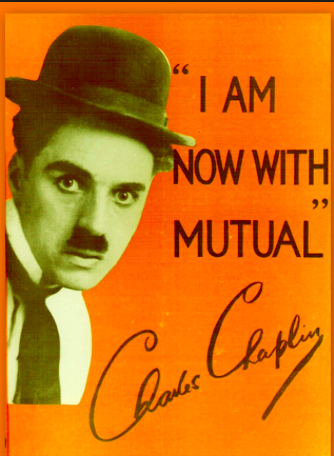 An early sign of Chaplin’s seriousness about his filmmaking appeared on the 27th:

“Charlie Chaplin, whose contract with Mutual expires in January, has been offered a renewal on the old terms. But Chaplin, it is said, is holding to the idea of being given more time for the production of his pictures, claiming he cannot do his best work under the present time limit.”

Chaplin did get what he wanted from Mutual: he kept the old financial terms of his contract (they were paying him $10,00 a week, making him one of the highest paid people in the world) but instead of producing one two-reel film every four weeks, he made only four films before the contract ended in October. However, they were four of his best films: Easy Street, The Cure, The Immigrant and The Adventurer.

Kingsley gave an update from The Spirit of ’76 production (discussed in my September 16th blog post):

A Harvard professor who happened to the in the mountains of Northern California when Mr. Robert Goldstein was there with his company making exteriors for his historical pageant “The Spirit of ’76,” was much interested in the work and especially in the title of the play. Mr. Goldstein told him that it was a historical picture and gave him the script to look over. Meeting him the next day he asked what he thought of it. ‘Well’, said the professor, ‘I feel as Mark Twain did when he saw Adam’s tomb in Palestine. He said he guessed it was all right, as nobody was there to deny it.

Poor Mr. Goldstein didn’t seem to recognize the professor’s joke. The Harvard man was wise not to comment on or expect historical accuracy in film – it hasn’t been there since the beginning.

Goldstein also lied to Kingsley, claiming that novelist Jack London was helping them with their production. That’s impossible because at that time London was dying a painful death from kidney failure, and he only had a month to live.

Finally, a film company asked for submissions from the public.

The Oliver Morosco Film Company announces it want strong, dramatic stories for its stars…The company offers to pay $1500 each for complete stories adapted to its needs, or upon which a complete photoplay may be founded. This story may be either in synopsis form, 500 to 2000 words each, or may be in the form of a book or story. The company especially desires modern society dramas with comedy relief, with carefully worked-out and logical plots, happy surprises, small casts and good acting parts, rather than the general run of ‘mechanical dramas’.

They might have regretted this announcement after they saw what arrived in the mail. In 1914 Kingsley had written a story, “How’s Your Scenario,” where she described how every barber, milliner, bank president, and travelling salesman had a script in his or her back pocket. Then she told the strange stories of some of the amateurs that scenario departments had to discourage, like the man who said he was qualified to write thrilling pictures because he’d actually been in a cyclone and a car wreak (they advised him to get an accident insurance policy instead of a writing career). Some things about the film industry haven’t changed a bit.

* Former prize fighters is a more accurate description: by 1916 they were both actors. William M. Thomas (aka Kid Broad) went on to play boxers in a few films and Walter Charles Robinson had been working with Griffith since 1910. 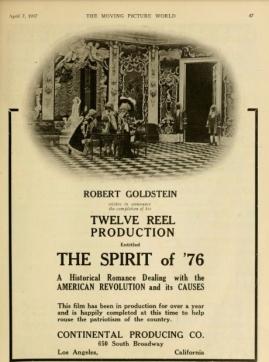 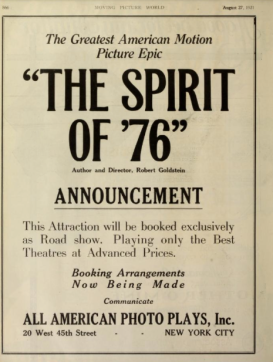 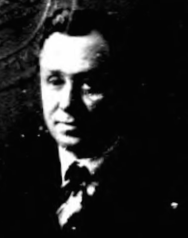 One hundred years ago this week, Grace Kingsley announced the formation of a new company, the Continental Producing Company, that

will begin active operation next Monday on the production of a big twelve-reel feature, The Spirit of ’76, embodying historical events and characters of the American Revolution…it is said that much painstaking research has preceded the production of the picture.

She didn’t mention the man who is the reason the film is remembered today, its writer/producer, Robert Goldstein. His story was so sad that it wouldn’t make a credible melodrama (the Slate article about him was called “The Unluckiest Man in Movie History”).

Mary Mallory wrote a very through article about the film and Goldstein’s subsequent troubles, but the short version is that the historical events in this patriotic film included British war atrocities. Showing allies in the World War doing such things was suddenly considered pro-German, and he was arrested and convicted under the Espionage Act of 1917. He served three years of a ten-year sentence. In 1921, he recut the film and it was shown in New York City for three weeks, but he had little success. He left the United States later that year and tried to find film work in Europe, ending up living in Berlin with his aunts. He returned to New York on August 16, 1935 (earlier writers assumed he died in the Holocaust, but his immigration record was recently digitized). He appears in the 1940 Census as an inmate of Riker’s Island, and that’s the final record currently available for him. It’s a shame Robert Goldstein ever wanted to make movies. To add insult to injury, it’s a lost film.

[Update: I visited the New York City Archive in October 2016 and I found only a dead end. Their records for Rikers Island end in 1936. I also checked the burial records for Potters Field but they’re kept by death date, and they’re missing the microfilm reel with records for 1942-1943. Maybe someday more records will be digitized and we can find out what happened to him.] 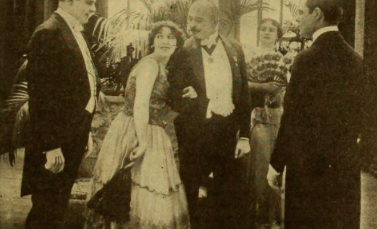 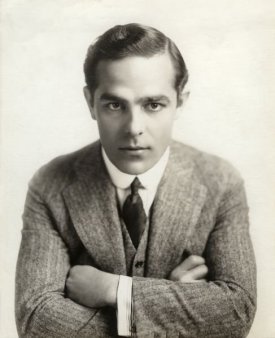 Kingsley’s favorite film this week was The Tarantula, a “tense and thrilling drama” about the downfall of a “he-vampire” (it’s about time!) Edith Storey played an innocent young woman seduced, impregnated and abandoned by a married man (Harry Hollingsworth). The baby dies, she becomes a dancer and he goes to one of her shows where she give him a jeweled box. When he passes out from drink, a tarantula emerges from the box, bites and kills him. She marries her faithful suitor (Antonio Moreno). And so we learn that the wages of premarital sex and revenge are to live happily ever after with an extremely handsome man. Hooray! (A few years later Moreno would become a star and rival to Valentino.) The Silent Feature Film Database says there are no archival holdings of The Tarantula, but it seems to be available on some sketchy streaming sites.

A notorious film came to town, but Los Angeles seemed “entirely apathetic” despite censorship battles waged in New York. Purity starred Audrey Munson as an artists’ model who poses nude to earn enough money to publish her ungrateful boyfriend’s poetry. Kingsley warned filmgoers that it was a bore; she thought that “the part calls for clothes – but there is no answer…there is a story, but it is obviously written merely for the purpose of stringing together through seven reels numberless poses of Miss Munson.” While the censors in L.A. were apathetic, the public was less so — the film played to capacity audiences. The next week, theater manager Seth Perkins learned just how relaxed the local censors were: hoping for a little publicity, he put up a “frank” photo of Miss Munson in the lobby. Unfortunately, not one person or official objected. He sighed to Kingsley: “Oh, for the old censor days!”

Kingsley revealed that even then people could be skeptical about Los Angeles standing in for other places: “The Lasky company apparently has implicit faith in California scenery and their art director. At present there are three features under production, with scenes laid in widely different localities on the earth’s surface.” The locations were Japan, the jungles of South Africa, and New York City.