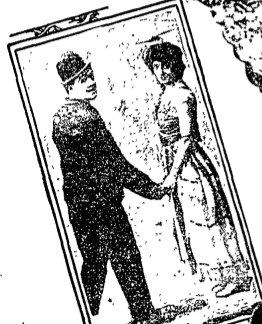 With his partner, Mae Dahlberg

One hundred years ago this week, Grace Kingsley noted that in response to the war, the film world was moving away from heavy dramas and making more comedies. Every organization had a comedy company at work, and the latest to add one was Bernstein Film Productions. They had hired a successful vaudevillian who had worked with Chaplin in the Fred Karno troop named Stan Jefferson. He had recently appeared at the Hippodrome Theater in Los Angeles under his other name in a sketch called “Raffles, the Dentist.” 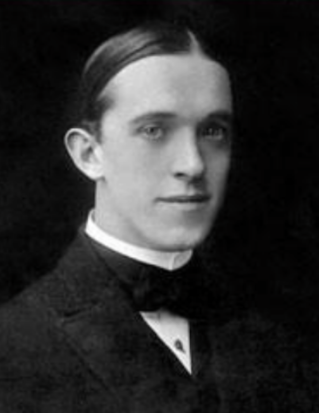 The Stanley Comedies Company made only one short film, Nuts in May, and Isadore Bernstein went back to being a production manager and writer. Jefferson played a mental patient who believed he was Napoleon Bonaparte. According to Cecil Adams, this is the first time the Napoleon Complex gag was ever filmed. Only about sixty seconds of it have been preserved, because they were re-used in a 1922 two-reeler called Mixed Nuts. This makes the hundreds of thousands of Jefferson’s fans sad (even if neither film is very good), because of course, soon after he made Nuts, Arthur Stanley Jefferson permanently changed his name to Stan Laurel. So much has been written about him, but if you’d like a short biography by an expert, check out Stan Laurel’s Life in Laughter by Randy Skretvedt.

This was the first time Kingsley mentioned Laurel. Norvell “Babe” Hardy, despite having made his first film in 1914, would have to wait until November 30, 1921 when she announced his marriage to Myrtle Reeve. 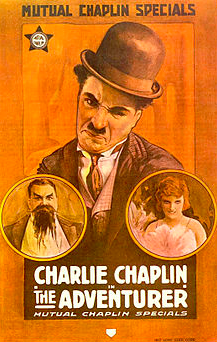 While visiting the theaters on Broadway Kingsley ran into Jefferson’s former co-worker and had a chat about his future plans. Charlie Chaplin said he was considering “three very tempting offers,” but he hadn’t decided which was best. He was also working on ideas for his next film, and told her “he thinks he will make it a burlesque on Bill Hart’s Wild West stories.” He may have just said that to appease Kingsley (Hart had a new film playing near them on Broadway that day which might have inspired his remark); his next project was a prison escape story, The Adventurer. It was his final film for Mutual, and he signed with First National next.

Kingsley reported a “record-eclipsing event” from Sunday: the cameramen from Keystone filmed their Bathing Beauties at the Venice Bathing Parade, and they got the film processed and on the screen at the Mack Sennett-owned Woodley Theater by that evening. The parade didn’t start until 1:30, so they did work quickly. Two hundred “neatly attired bathing-suit girls” rode in forty-one cars past a crowd of 75,000 people and four judges. Most of the prizewinners were actresses, but only Keystone women got their pictures in the paper. (Sennett never missed an opportunity!) Mary Thurman (Keystone), in an electric blue and white sailor suit with matching parasol, shared first place with Priscilla Dean (Universal) in a modest white and black silk suit and Jessie Hallet (New York Motion Picture Co.) dressed as a Red Cross girl in red and white. Second prizes went to Juanita Hansen (Keystone) in a metal gold cloth and blue outfit and Margaret Gibson (Christie) wearing red and white. 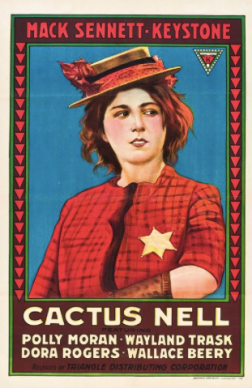 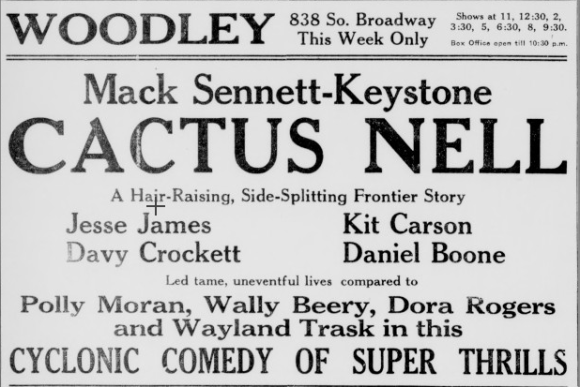 The parade footage played with another Keystone short that was Kingsely’s favorite film this week, Cactus Nell. She felt it was the answer to the eternal question “Why are there mellers? They were made for Keystoning purposes!” The star, Polly Moran, was “queen of the jazz comediennes” a “high-power fun-maker who keeps things moving at the rate of a million revolutions per minute.” She described the best bit: “Does Polly’s big boob lover desert her for a vampire? He does, and Polly follows and lassos him, with the help of her trusty cowboys, who, by a comic mechanical device, are shot onto the backs of their horses at her first call for help.” Moran went on to a long career as a slapstick comic, first with Sennett and later at MGM.

One hundred years ago this week, Grace Kingsley started her Sunday column by excoriating a bunch of busybodies:

Uplifters are born, not made. There are certain people in the world who are natural uplifters. These persons can’t see any movement in science, literature, art or any other department of existence, without entertaining a desire, figuratively speaking, to roll up their sleeves, spit on their hands and give the new movement a heave upward. From diet to divine healing, from prize-fighting to poetry, these people are always Johnny-on-the-spot, ready to tell those back of any particular enterprise exactly how to achieve the proper result. The stage used to be the subject of attack from the uplifters. Now it’s the pictures, with the Photoplay League as the attacking party. This organization has its headquarters in New York, and the films are the subject of endless “resolutions,” movings and secondings. 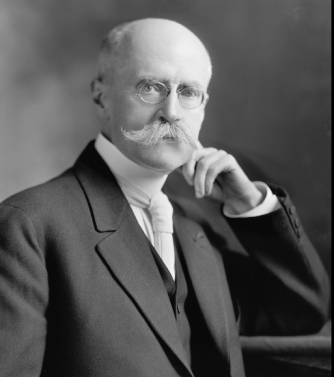 The Photoplay League, founded in September 1916, said its primary goal was to support “worthwhile” films, and encourage the public to see the ones that reached their standard. These standard-setters included nurse and co-founder of the NAACP Lillian D. Wald, stage actress Julia Marlowe, and artist Edwin H Blashfield. They also tried to organize local Leagues throughout the United States.

I couldn’t find any list they published, but Thanhouser used their recommendation in an ad for The Vicar of Wakefield. The League was given a lot of publicity by Photoplay Magazine in late 1918, but faded quickly after that.

Kingsley disagreed with their aims eloquently, pointing out how quickly films had grown in sophistication: “The day has gone by when prop boys were put in as directors and the corner grocery ablaze was sufficient ‘plot’ on which to compose a story while the cameraman ground. Hardly any art in the world has ever made such strides in a few years as motion picture making.” She noted that Intolerance and Joan the Woman were sufficient evidence of progress and concluded that film “needs not the priggish snifflings of an outside band of self-constituted censors to achieve its uphoisting.”

This week, Kingsley enjoyed a bunch of two reel comedies that the League would probably not have approved of. The first was an example of the self-policing of the industry that Kingsley preferred to “priggish snifflings,” because one way to improve movies is to make fun of the really bad ones.

Villa of the Movies is one of those delightful Keystone travesties on melodrama which are something more than mere hanging together of thrilling and supposedly amusing incident. This one takes a keen shy at the melodramatic trash of the day which is being precipitated in the name of Mexican border war drama, and that is accomplished with broad good humor is all the more to its credit… the spy who wants to know a way to ‘get’ the brave general is advised by a traitor “Put dynamite in his guitar and tell him to sing Goodbye Forever.

Villa of the Movies was directed by Eddie Cline, who had a long career that included directing most of Buster Keaton’s two-reelers and W.C. Fields’ The Bank Dick. Except for a short detour to drama in the mid-twenties, his ambition was to make funny films: any uplift of the industry was purely a coincidence.

Kingsley also had fun seeing His Friend the Elephant.

There are more laughs to the square inch of film in the comedy at the Garrick this week than have been strung together in many a long day. “His Friend the Elephant” is a Christie Comedy in which Harry Ham, as the poverty-stricken hero, has a pachyderm left him as a legacy. His embarassments at the attachment of the elephant, which insists on following him everywhere; his efforts to get rid of it; its untimely appearance when he thinks he has got ridden of it – all make for hilarious comedy.

Al Christie had been making comedies in Hollywood since 1912, and his company specialized in films about funny situations, not slapstick. The company stayed in business until 1933, when it was bankrupted by the Depression.

The short that impressed Kingsley the most this week came from Max Linder:

He’s the French Charlie Chaplin, and if our memories serve us, he thought of a lot of things before Charlie Chaplin did. Max Comes Across is the title of Linder’s first Essanay picture, made in America. Of Linder’s work on has only to remark that he makes even an imminent attack of mal-de-mer very funny without offensiveness to prove that he really is more amusing than most of his bretheren of slap-stick. It is indeed in the manner of his doing—a truly Latin lightness and sureness of touch – Linder’s superiority lies. The slap-stick is turned into a magic wand.

Linder is often called a forgotten hero of cinema. He’d been making films since 1905 and his work not only influenced Chaplin, but also Sennett, Lloyd and most film comedians after him. Max Comes Across was his first film in two years: he’d been recovering from injuries he’d gotten while fighting on the Western Front in 1914. Still unwell, he didn’t like working in a foreign country, and he made only three films before he returned to France. This film isn’t available, but the other two he made in America, Max Wants a Divorce  and Max in a Taxi are in the Internet Archive. 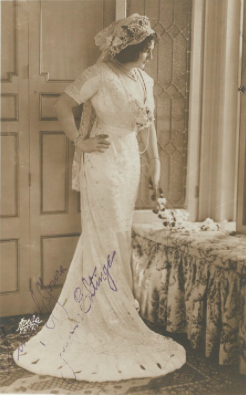 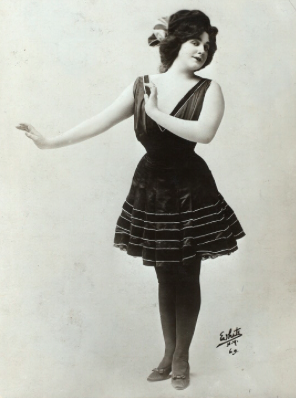 Julian Eltinge, the female impersonator, was in Los Angeles touring with the play Cousin Lucy, and he was still able to make jokes about the war that was one month away. He declared he would help fight, saying

Attend the war? Well, I should say so. What terrors shall war have for me after all I’ve suffered from female apparel. Getting busted with a bullet can’t possibly have anything on lacing a thirty-four inch waist into a twenty-four inch corset; and, though war is hell, think of what a No. 4 French slipper feels like when worn on a No.7 foot!

If you’d like to know more about Eltinge, you can visit the site for a planned documentary film about him.