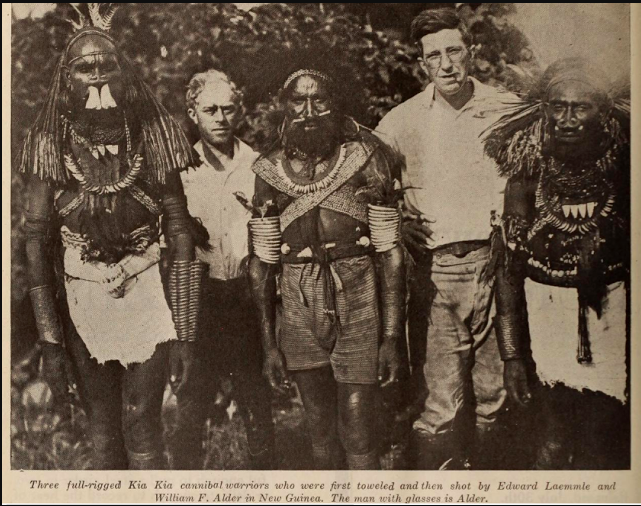 One hundred years ago this week, Grace Kingsley saw a documentary that was extraordinarily entertaining:

“Once in a while real life outstrips the movies. One of the most remarkable features that was ever filmed is being shown at the Palace. Shipwrecked Among Cannibals is the title, and for a real thriller this picture is 100 per cent entertainment. The picture was taken among the Kia Kia head hunters of Dutch New Guinea, by two American motion-picture men who were shipwrecked on the shores of cannibal land. Their introduction to the natives, the manner in which they were received, the cannibals bearing down upon them along the shore, a surprise attack, the cannibal slaughter ceremony, the head dance, the Kia Kia children with human skulls as their playthings and every type of savage warrior are shown in this remarkable film, with which the two men returned to civilization.”

Alas, the thrilling bits weren’t true: the shipwreck was fiction, and the ‘cannibal’ attack was scripted, according to Leonard Maltin’s Classic Film Guide. Furthermore, indigenous people in New Guinea had abandoned cannibalism in the previous century. Nevertheless, the rest of the hour-long film showed American audiences parts of the world they otherwise would have never gotten to see, including Javanese volcanoes, a tiger hunt in Thailand, and tribal customs of Borneo.

The two motion-picture men were William Alder of the Southern California Academy of Sciences and Edward Laemmle of the Universal Film Company (its president, Carl Laemmle, was his uncle). They left on a 13-month expedition from Universal City on April 17, 1919 and they also visited Japan, China, Indonesia, Australia and the South Sea Islands. It was often hard going even without a shipwreck, for instance, when they sailed up the Baram River in Borneo:

This trip entailed many hardships, for after reaching the head of navigation, they embarked in native boats, practically cutting their way through the jungle, and walking the last forty miles through swamps and dense undergrowth.  (“Expedition in Fruitful,” Los Angeles Times, June 6, 1920)

After they returned to Los Angeles on May 22, 1920, they quickly got their film ready for its New York premier in early July. The critics there were just as enthusiastic as Kingsley was; The New York Evening Sun said,

“For realism, it outstrips the wildest scenario ever drafted. It is one of the most thrilling films ever displayed here.”

So it looks like it wasn’t widely known that it was part-scripted (but honestly, who stops to film when you’re being chased by angry locals?) Shipwrecked is lost, so we can’t see how plausible it was, or how much it would make modern documentarians and anthropologists cringe. Of course, we’re no better now: some people believe ‘reality’ television is true.

The ad campaign made sure that nobody thought it was a dull educational travelogue:

The ads really worked: according the Universal, Shipwrecked Among Cannibals was their first film to make a million dollars. 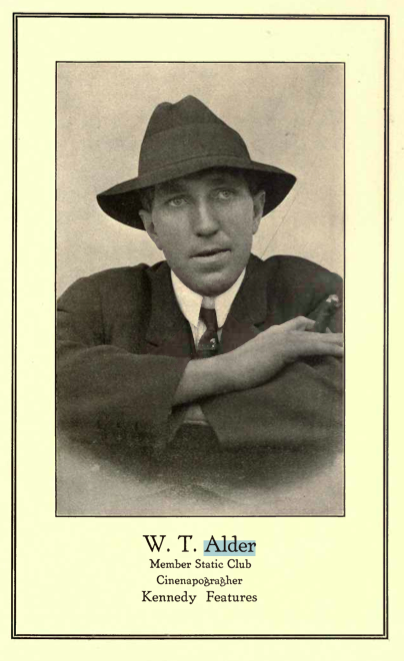 The trip wasn’t a total loss for recording something about indigenous people’s customs. William Alder wrote two books based on his travels, The Isle of Vanishing Men (1922) and Men of the Inner Jungle (1924). Alder had a life of great variety. Born in Oil City, Pennsylvania on July 28, 1886, after high school in Chicago he spent three seasons touring in vaudeville as a magician. Then he settled down in Cleveland where he helped install theater equipment. By 1910 he’d become a portrait photographer in Rock Island, Illinois before he moved to Los Angeles and switched to moving pictures. He worked for several production companies, including Sterling, Fred Balshofer, Kennedy, Quality Pictures and Triangle-Ince.

After the expedition he also wrote a novel, The Lagoon of Desire, which he adapted and filmed in Tahiti as Fire Bride (1922). Then he became an inventor, patenting devices that increased heat transfer and measured sound, as well as a camera attachment that simulated 3-D in moving pictures with the use of revolving mirrors. Cinematographer Gregg Toland shot tests using it in 1935 and he wrote in the New York Times that the images were “startlingly clear,” but the method didn’t take off. Alder retired in Aptos, California (near Santa Cruz) and wrote a book of art criticism, Peril on Parnassus (1954) (he disliked Modernism and Picasso intensely). He died on January 9, 1956 in Ventura, California. 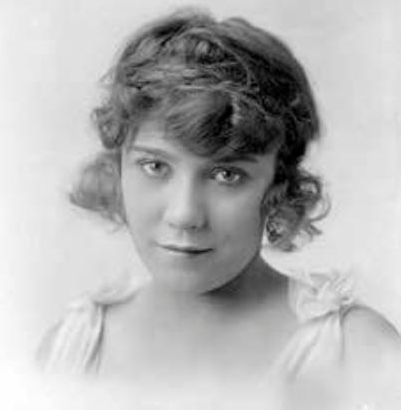 This week, we learned that actress Louise Fazenda could really keep a secret. Kingsley reported:

Louise Fazenda, who has just returned from making personal appearances in San Francisco speaking in connection with the presentation of Mack Sennett’s Married Life, is rumored to be about to find out all about what she is talking about. If you get me.

Fazenda was already married, but Miss Kingsley (and her readers) had no idea. Her husband was Sennett director Noel M. Smith and they’d been wed since 1919. Fazenda biographer Lea Stans  doesn’t know why it was secret, and the two separated in 1923 and divorced in 1926.