One hundred years ago this week, Grace Kingsley reported on the return of a serial unit from a really long (and presumably expensive) shoot:

The film folks at Universal City were all busy yesterday shaking hands with Marie Walcamp, Harland Tucker, Henry MacRae, Eleanor Fried and the dozen other Universalites who composed the expedition to the Orient and who have just returned home after an absence of seven months. Director MacRae reports that the entire serial has been completed with the exception of several sequences of interiors, which will be filmed here within the next few days.

I had no idea that a studio would spend so much money on a serial in 1919-20! The film came to be called The Dragon’s Net, and in an article about the shoot two months later, Kingsley summarized the current state for that part of the film marketplace: “serials for the most part belong to what might be called the ‘early Universal’ period of pictures. They aren’t being used at all this season in our best theaters.” Nevertheless, she paid tribute the fun they provided:

But do you remember how you used to sit and bulge out your eyes at the wild adventures of the brave hero…who didn’t think he had enough for a mess unless he killed at least five crooks at a throw! As for the heroine, what a trustful girl she was, to be sure. No matter how often she got caught by the villains and thrown into dark wells and crocodile dens and amidst crowds of villains, the sweet young thing would get up any time in the middle of the night at the call of a total stranger’s voice, and hike out to get caught again! That girl never did seem to learn any sense.

However, The Dragon’s Net was innovative:

“But now there’s a new order of things in the serial world. It has just been invented by Henry MacRae. The new serial is a combination of story and travelogue, and you have no idea of the zest in those fresh and inherently interesting backgrounds!”

Kingsley watched fifteen reels of the now-lost film, and she enthused that she “never wearied for a moment, so adroitly has the historical and travelogue feature been worked into the thrilling story.” Universal got their money’s worth, it seems. Based on a 1917 Adventure magazine story by J. Allan Dunn, “The Petals of Lao-Tze,” the plot was a normal serial plot: eight lotus leaves hold the secret for eternal life, and Marie Carlton (Marie Walcamp) and Harland Keeler (Harland Tucker) decide to hunt them down while being pursued by the villains. They survive kidnappings, robberies, torture, fights, poison gas, etc. 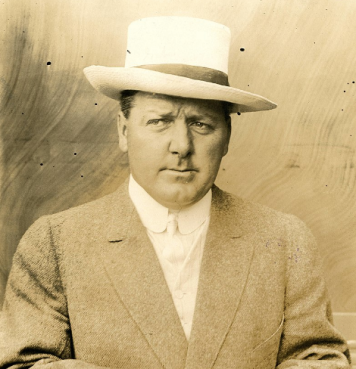 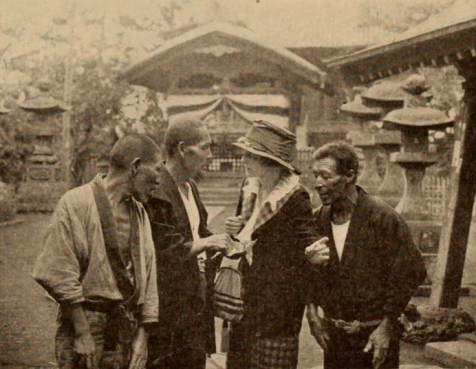 Kingsley also interviewed its director, Henry MacRae, about the time they spent in Japan, China and the Philippines. Filming locations included the Great Wall, the Dowager Empress’s summer palace in Peking, Mongolia (where the locals had never seem films being shot), the old Japanese capital Kamakura, and historic buildings in Manila. They met all sort of people, from a Chinese woman who didn’t want to be photographed (“the one pretty girl in the world who doesn’t want to be a picture actress”) to the Filipino man in Cebu who would only act with his shirt on, because even though the Americans were shirtless he didn’t want the world to think Filipino people were uncivilized. The Americans were surprised by how things were done; for example, “one of the first sights the party glimpsed on entering Shanghai was a line of Chinese people carrying baskets slung across their shoulders. The contents turned out to be gold and silver, and these they will carry long distances through the country without any guards.” It was quite an adventure. They even had a love story: 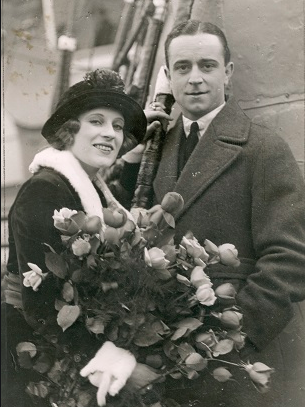 The bright touch of romance on the trip was furnished by the marriage of Marie Walcamp and Harland Tucker, the two stars of the organization, over whom the soft, warm moonlight nights of the South Seas cast their spell, and who were married in Japan.

They stayed married until Walcamp’s death in 1936.

Henry MacRae continued to make serials, and he went on to be the serials production chief for Universal until his death following a heart attack in 1944. His Variety obituary said: “a constant exponent of action in films, MacRae directed action dramas, serials and westerns by choice rather than stepping into higher budgeted production.” (October 4, 1944)

It seems that studios needed to pay for location shoots, because audiences were becoming more demanding about authenticity if Kingsley’s review of The Virgin of Stamboul this week is any indication. She complained about other films

tricked out in Oriental* duds, and masquerading as Oriental stories, when the characters and theme were about as Oriental as a mess of beans. And how sick we are of pseudo-Oriental scenes in which Broadway beaus, who never got further East than Coney Island, are tricked out in swathing Eastern robes, and wherein a harem scene consists of a couple of shimmying extra girls, against a background made up of a set painted to represent marble and decorated with three thirstless palms!

Harumpf! They solved the authenticity problem a different way in Kingsley’s favorite film this week by setting it in an imaginary country:

Vividly fanciful and intriguing as some old Japanese legend, and played in exactly the right light key, with occasional glints of comedy in an aerial satire, is Sessue Hayakawa’s latest film play, The Beggar Prince, which is unrolling its charming length at Miller’s. It shows us Mr. Hayakawa in a new light. The tale is of a prince and a poor fisherman of some legendary land who accidentally change places, with the arrogant prince learning common sense ad human kindliness through his hardships.

Mr. Twain’s Prince and the Pauper plot is certainly durable! The dual role in this lost film let Hayakawa act as both his usual brooding sex symbol and in a rare comic part. However, according to Kingsley the best thing about that imaginary land was that there “princes wear gorgeously barbaric raiment, very becoming to Mr. Hayakawa.” See if you agree: 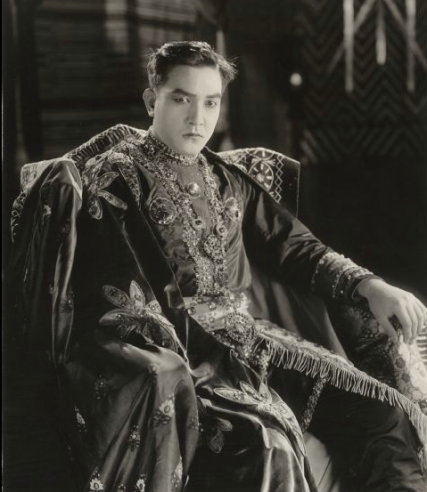 *According to the OED, in the 1920’s “Oriental” meant anything not Western, not just East Asia. It also wasn’t a slur yet.