One hundred years ago this week, Grace Kingsley reported on “the great impeccable occasion of the year in Filmland, the Thanksgiving Ball.” Held every year since 1915 by the Motion Picture Directors Association at the Alexandria Hotel, the dance gave everyone in Hollywood something else to do other than rush off to family obligations. This year it was on the night before Thanksgiving, so people wouldn’t have to get up early for work the next day (Black Friday wasn’t a day off then).

It was quite an event: the MPDA hired two orchestras, which alternated turns so they were always “full of vim and vigor,” and they served a late supper. Nevertheless, Kingsley reported that ”the party got to such a slow start that Clara Williams threatened to start a pinochle game,” but soon things got going and Kingsley was able to gather some pleasant, gossipy stories.

Bebe Daniels had a fine time at the party, even though she was well chaperoned:

The handsome Wallace MacDonald wore make-up on his coat – mostly Bebe Daniel’s. Miss Daniels was clothed in that siren shade of Viennese red and vamped whenever mommer Phyllis Daniels wasn’t looking, just like an old-fashioned coquette.

How scandalous! Daniels was only 18 years old at the time, so she was being developmentally appropriate.

Prohibition had changed things, and Kingsley was able to report:

There was only one genial gentleman who had apparently imbibed. He was, we blush to say, a playwright. He invited a nice girl to dance with him, but found it hard to make the grade, and Lew Cody, always willing to save a girl dashed into the arena, as it were, and seized the young lady from the genial gentleman.

Good for Mr. Cody! Getting drunk would have been difficult at this party; Kingsley mentioned that they served temperance punch, and “it was rumored around late in the evening that nearly a whole cup of claret, first and last, had been poured into one of the punch-bowls and there was quite a rush.”

But the nicest story she told involved director (soon to be with Hal Roach) and future comedy star Charley Chase, who was then known by his real name, Charley Parrott.

One of the belles of the ball was little Ella Wickersham, who used to dance and work in pictures before accident and her wheelchair overtook her, and she had a little flock of beaux around her most of the time. Charley Parrott begging her to ‘give him three dances, please, in spirit, you know,’ and sitting them all out with her, while half a dozen lively misses languished for his smile.

Ella Wickersham was a regular at Hollywood parties for three decades. Formerly at Balboa Studio and a vaudevillian, she had a dance act with her brother, Billy Wickersham. One day when she was 15 they were dancing and he accidentally dropped her, which broke her back and left her paralyzed. He looked after her for the rest of her life and became a studio publicist and newspaper reporter. She went on to write the “Hollywood Parade” column for the Los Angeles Examiner. She was friends with all sorts of famous people; an article in Screenland article about her was called “The Most Popular Girl in Hollywood” (December 1930, p. 58). She died in 1946. 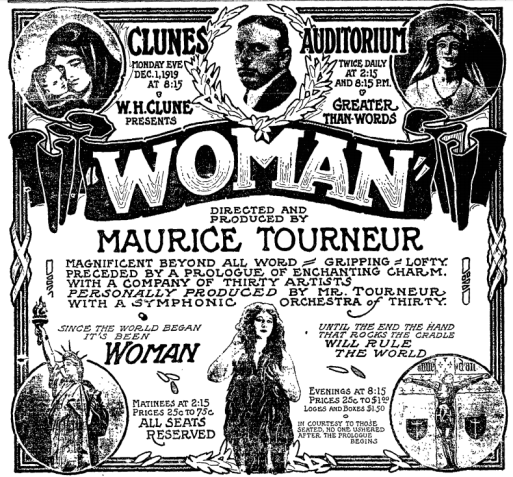 Kingsley reported on a film that was a great big hit this week:

With lovely woman as a theme, and especially with it advertised that Eve, in the original birthday clothes, was on the programme, naturally Maurice Tourneur’s latest photodramatic spectacle, Woman packed Clune’s Auditorium to the doors last night, men making up about two-thirds of the audience.

Clune’s held 2,700 people, so that was a lot of tickets. Female nudity wasn’t the only attraction; it also offered plenty of misogyny. The film begins with a modern man reading a book about women in history. As Kingsley pointed out “really, I think that man must have had a naughty mind, because he picked out all the bad ones to read about!” They including Eve, Heloise, and Messalina. However, eventually women redeemed themselves. Kingsley wrote, “it would appear at the end that it was only because of the war that women were made good!”

While the theme was irritating, Kingsley did admire the cinematography: “pictorially, Woman is a marvel of beauty.” Sadly, the cameraman died while making this film. John van den Broek got swept out to sea while shooting on a cliff near Bar Harbor, Maine. He was only 23 years old. According to his obituary in Moving Picture World he was on a ledge close to the water when a high wave came in and took him and his camera (July 20, 1918, p.391). They quoted Maurice Tourneur: “Van den Broek was an artist, and didn’t consider his own safety when he saw the opportunity of taking a beautiful effect. He risked his life many times and in the end gave his life for his art. For more than four years the boy worked with me every day, from morning to night…He was more than a cameraman; he was a lovely, sensitive, delicate artist. My intention was to surprise him by making him a director next fall, and he would have been among the best ones. He was loved by everybody.” 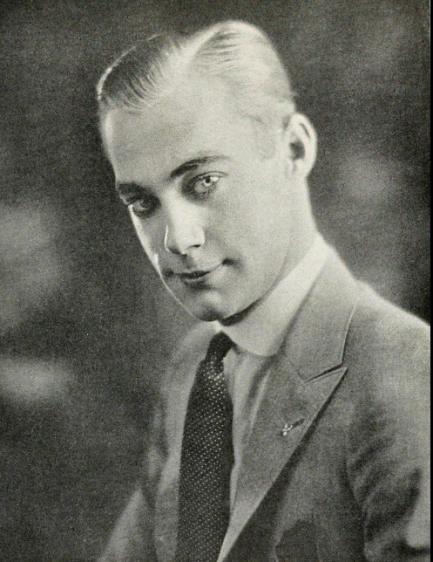 Kingsley also had news of Al St. John, “that pepful young man, who lately broke off from the family stem of comedians brought fourth by the radiant good fellowship of Roscoe Arbuckle’s studio.” He had signed a contract with Paramount to make solo comedies, and he’d just gotten good news: his first two-reeler, Speed, “was being shown in no less a place than the Capitol Theater in New York, where it was sending ‘em into gales of laughter and creating a great hit.” Speed is a lost film.

A few days later, Kingsley reported that heavyweight fighter Jack Dempsey, who was getting ready to make his own movies, visited the set: “Al and his company were pulling a jazzerie by wreaking a set in a big fight, but Al dashed out long enough to shake hands and exclaim “I’ve heard a lot about you, Mr. Dempsey!” Later that day:

Dempsey and St. John did some acrobatics and the big boy threw Al around as if he were going to break something with him. As a parting salute, Al St. John did two falls downstairs, jumped off the top of the set, and fought three fellows to the finish; and Jack Dempsey was heard to heave a refined sigh as he exclaimed under his breath: “Gee, but I’m glad I’m going to be a dramatic actor!

They also took the time to pose for this nifty photo: 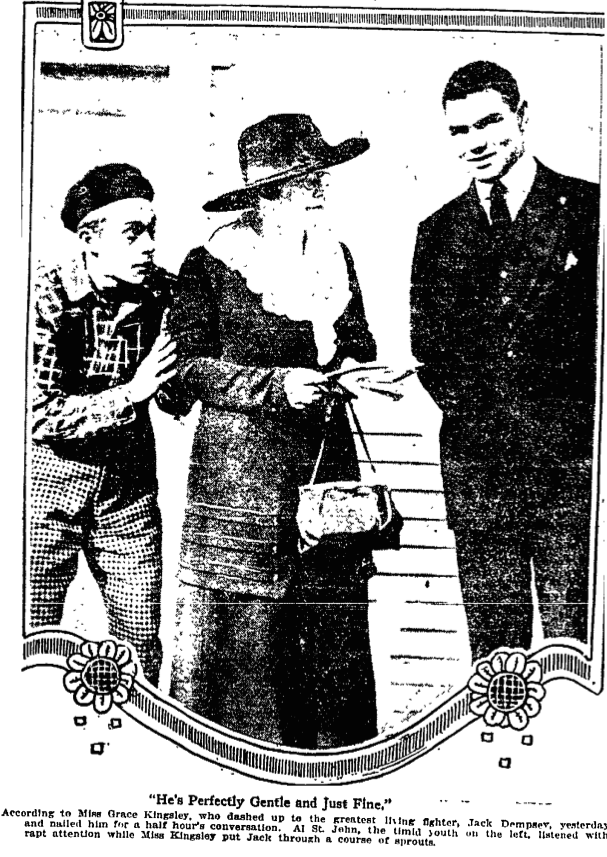 This week, Kingsley also printed a list from Louise Glaum, who had just finished wokring on Sex. It was an excellent summary of the then-current Hollywood star clichés:

“In novelty’s name one film star has jotted down what she is not, thus delivering the long-suffering public from the usual hyperbolic encomiums directed at screen favorites by their publicists.

Gee, most of these still appear in star profiles, if you substitute “African” for “Polish” and “make-up” for “aeronautical.”