One hundred years ago this week, Grace Kingsley had a story that proved even the most privileged people wanted to try their luck in Hollywood. However, this one faced an obstacle that nobody else did:

No more shall the bulging eye of the commoner be permitted to feast itself upon the fair forms of the nobility in the films. At least that’s what a dispatch from London states, no less a person than Queen Mary herself having issued the edict prohibiting members of the English nobility from appearing in the pictures.

It all came about through the fact that Lady Diana Manners, who played a bit in a propaganda picture at the request of D.W. Griffith, apparently became bitten by the picture bug. She was about to sign up a contract with an American film corporation—supposedly the Griffith organization, as it is known that a representative of Griffith went to London for the purpose of trying to get her to affix her name to a contract.

Lady Diana, it seems, was willing to sign the contract, but the Duke of Rutland, her noble dad, flatly refused, whereupon Queen Mary informed the young woman that if she made the picture appearances she would never be received at court again. Lady Diana is one of the best known of the younger set of the English nobility. She was an ardent war worker and is gifted dramatically, but fate, it seems, has conspired to kill her chances of winning fame and a nice big salary in pictures. 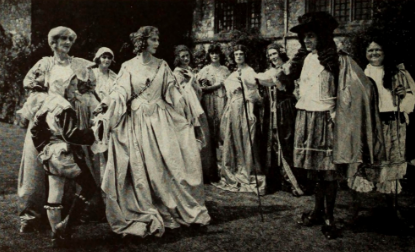 Everybody wanted to be a movie star! Lady Diana didn’t come to Hollywood, and she was soon busy getting married to Duff Cooper the following month. She didn’t abandon her film ambitions, however: a few years later she had a leading role in two British films, The Glorious Adventure (1922) (the first British color feature, it was about the Great Fire of London) and The Virgin Queen (1923) (she got to play the title role, Queen Elizabeth). Queen Mary apparently didn’t object to either of those, and her impecunious husband was happy about her salary. 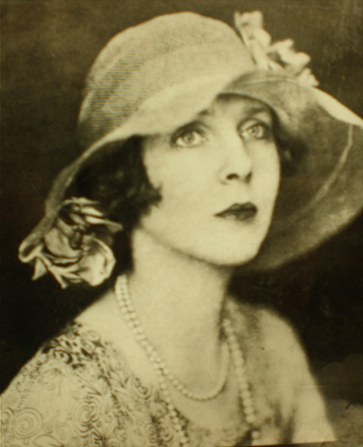 Lady Diana Cooper had an interesting life that rarely involved irritating the Queen. The Australian Financial Review, of all places, has an amusing biography of her, but the highlights are that she was known as the most beautiful woman in England. She was a celebrity, often appearing in newspapers and magazines. Her parents were disappointed with her marriage, because they thought she had a chance at the Prince of Wales (he was later Edward VIII until he abdicated to marry Wallis Simpson—Lady Diana definitely got the better end of that bargain). Duff Cooper was elected to Parliament in 1924; she supported him as a society hostess and she was very good at her job. Best of all, both Nancy Mitford and Evelyn Waugh based characters on her. Later in life, she had enough stories to fill three volumes of memoires. She died in 1986, aged 93.

Kingsley’s favorite film this week featured William Desmond in a role that was a change from his usual ‘indestructible Irishman’ character. In The Prodigal Liar he played a young man who impersonates an outlaw to impress Betty Compson, an Easterner visiting the West who’s disappointed that it’s no longer wild. Complications ensue when the real outlaw escapes from prison for some thrilling chases, all adding up to the “freshest, sparkleingest, most whimsical comedy” shown at Ray’s Garden in a long while. William Desmond went on to make many straight Westerns in his long acting career that continued until just before his death in 1949.

Kingsley learned about one way to cope with unemployment when she interviewed an up-and-coming star this week, Zasu Pitts. She told her that when she couldn’t find much acting work, she “used to get awfully blue,” and on wet days to amuse herself she rode up and down in the elevators in the tall buildings. It’s a good thing it doesn’t rain very often in Los Angeles! Happily, she was able to regularly find work for the rest of her life, so she didn’t need to resort to elevator riding.