One hundred years ago this week, Grace Kingsley was sick of slapstick comedies, and she gave us a list of everything she’d seen enough of:

Something besides jazz comedy—with its eternal races, its repartee administered by a slapstick on the nether portion of the fat comedian, the wit of the biffing bladder, trick photography showing the thin gentleman tripping along in the sky, airy persiflage in the form of dough thrown at the professor’s whiskers.

Luckily, what she wanted was served up this week:

The pieless comedy is with us at last on the screen…In short, crisp, original farce, written especially for the screen—not mere warmed-over farce adapted from stage plays. If you want to laugh until you cry, go and see The Game’s Up at the Symphony. Never were more adroitly comical complications than arose from Ruth Clifford’s pretending to her small-town chum that she, Ruth, who had gone to a great city, had become a great artist.

She paints menus for a living, which I didn’t know was a career option (so she drew pies instead of throwing them). The chum comes for a visit (oh no!), and with the help of a chauffeur who’s actually a rich man’s son (surprise!) Ruth keeps up the pretense. After “a lot of complications you’ll foresee, but laugh at anyway,” it ends with weddings all around (the son has a nice friend for the chum).

This welcome change was brought to Kingsley by a woman director, Elsie Jane Wilson. She was born in Sydney, Australia and had been acting since she was two years old. She met and married fellow actor Rupert Julian and they immigrated to the United States in 1911. They moved to Los Angeles in 1914 and found acting work at Universal Studios. They both became directors; Wilson in 1917 on the family film The Little Pirate. She got to direct 11 films. Unfortunately, The Game’s Up was her last, which is a shame because non-slapstick comedy would become a regular film staple in the next decade and it sounds like she really knew what she was doing. Her husband got to continue directing for Universal, even their prestige picture The Phantom of the Opera (1925). Most of her films, including this one, are lost. However one, The Dream Lady, is on the new Pioneers: First Women Filmmakers DVD.

The star, Ruth Clifford, went on to a very long career as an actress and she was happy to talk to to film historians. Kevin Brownlow wrote her obituary when she died, aged 98.

Live theater was still going strong in Los Angeles, and this week, the opposite of the trend I read about in film histories, happened: Clune’s Auditorium, the 3000 seat theater where some of the most successful films had played, from Birth of a Nation to Cleopatra, switched to back to vaudeville. Owner William Clune had signed with Ackerman and Harris, vaudeville magnates, to link his house to their chain of successful theaters, the Western Vaudeville Association. The opening show was a satirical review called Fads and Fancies plus a vaudeville bill.

Kingsley got to review it and said:

success perches high on the dome of Clune’s Auditorium, if last night’s crowd, the greatest in the history of the big theater, which greeted the transformation of the house from a picture palace into the home of musical comedy, is any criterion. It was a good-natured crowd, too—one that wanted to be pleased. But even if it had been much more critical than it was it would have been happy.

So it looks like it was a good business decision. The Auditorium never did go back to showing films. In 1920 it became the home of the Los Angeles Philharmonic Orchestra, which played there until 1963. It was demolished in 1985 and turned into a parking lot, but now apartments are being built on the site. 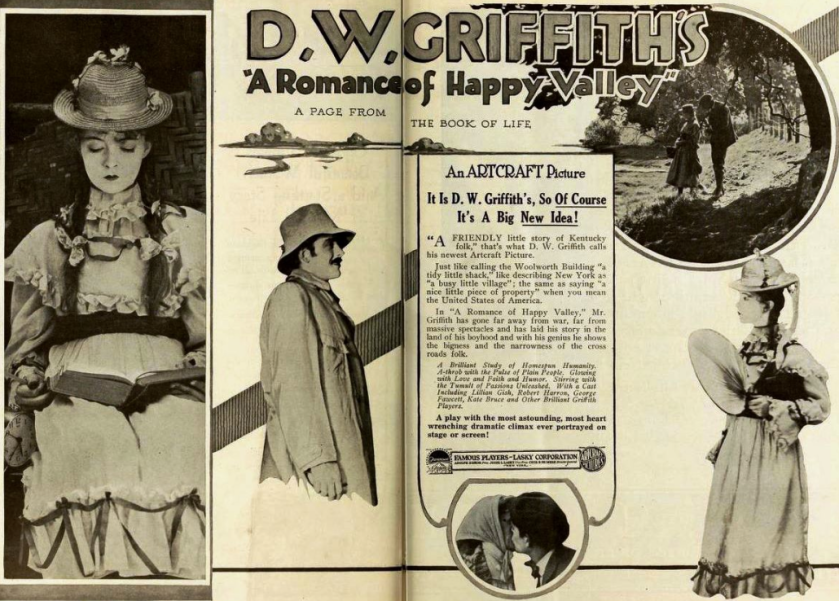 Kingsley got to see a preview of D.W. Griffith’s latest, A Romance of Happy Valley, and she was impressed:

Something entirely different, but just as entirely intriguing as the usual Griffith pictures is A Romance of Happy Valley. The story is an idyll of an old southern town, and full of delightful types, while there are fairly Barrie-ish touches in its whimsicality, especially in the scenes where Lillian, as the heroine, having carried off the absent hero’s coat, which was being used as a scarecrow in his father’s cornfield, holds tender communion with the garment, as though the owner still wore it. And there’s a surprising twist to the exciting plot.

Kingsley really had been seeing too much melodrama, if she thought that attempted filicide was just a ‘surprising twist.’ The film survives, and is available on the Internet Archive.