One hundred years ago this week Grace Kingsley wrote about her very odd interview of an aspiring star and her director. They refused to tell her name:

Her identity is to remain a mystery for the present, and the public is later to be asked to name her through a magazine contest…You find out by looking at her, though, that she is beautiful, statuesque, a brunette, and you speedily learn from Mr. Taylor that she was a Southern belle.

Mr. Taylor was Charles A. Taylor, an established playwright who had been writing screenplays since 1916. He was most famous for being theatrical actress Laurette Taylor’s first husband, and he declared that the mystery woman was to follow in the famous Laurette’s footsteps. He discovered her one evening at the Hollywood Hotel, and

he liked the way she smiled and carried herself, and his attention was completely engaged by the intangible something known as charm and personality, which she possessed.

So he asked her if she’d like to be in pictures, and she answered, “Ask Poppa.” Her father said yes, so Taylor “began skirmishing” for the money, wrote a story about a circus rider for her, and they made the movie.

This, of course, was nonsense. After a bit of searching, I learned that the actress who came to be called Prudence Lyle was actually Emily Griffith Sawyer, and “Poppa” was A.B. Griffith, a cotton magnate from Texas. According to Motion Picture News, he funded the film. There never was a contest to name her; “Lyle” was her husband, Tom Sawyer’s*, middle name. They did a good job of hiding the connection between the funding and the star, but it was a vanity project. (I only figured it out by comparing a photo of Mrs. Tom Sawyer and Prudence Lyle.) 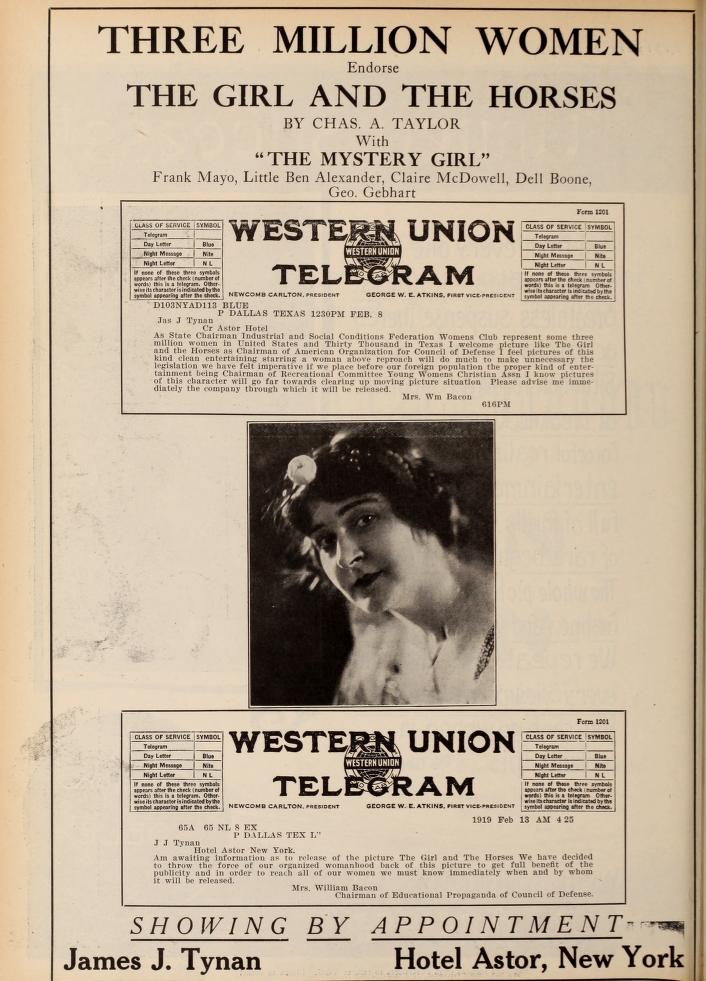 The picture was first called The Girl and the Horses and later, Through Eyes of Men. The now-lost film was sold on a states-rights basis. The plot showed how Taylor earned his reputation as the “master of melodrama;” here’s how the AFI Catalog recounts it:

One day, while on the beach, wealthy Franklyn Allen sees circus performer Leila Leighton cavorting in the surf and immediately falls in love. Leila, fearful of the knowledge that circus owner Berkaro has of her early life, discourages the romance. Tormented, Leila takes Little Billy, a child performer in the circus for whom she is caring, places him in a convent and disappears. Franklyn traces her to the circus, where she has gone after learning that Berkaro had lured Billy from the convent. Berkaro attempts to kidnap Leila and the boy, but Franklyn chases him through the surf on horseback and, in the ensuing struggle, the circus owner is killed. His death elicits Leila’s confession that she was the only surviving member of the royal house of Hesthonia, after the rest of her family was murdered in a coup. Her terrible secret thus revealed, she is accepted by Franklyn’s family and marries the man she loves.

It didn’t play in Los Angeles until 1921 when it was on a double bill with The Daughter of Devil Dan. The paper didn’t review it.

Though Motion Picture News mentioned A.B. Griffith had plans to build a studio in Dallas, that never happened and Through the Eyes of Men was Prudence Lyle’s only film. Eventually Emily Griffith Sawyer moved back to Texas, split up with her husband and married Richard Ommo Meents, a geology professor. She had two more children, became a clerk to the Texas Senate and died in 1979. Charles Taylor became the head of the scenario department at Morosco Studio and went on to direct The Half-Breed (1922) for them. He died in 1942.

Meanwhile, the Health Commissioner and the City Council dithered over whether they should re-open the theaters or not (the title of the article on Thursday was “Ban Off and On Again”). No one doubted that one fine day it would end, and Grace Kingsley wrote a cheerful article on the improvements the owners had made during their involuntary break:

Most of the theaters were repainted and replaced their carpets and draperies; several installed new lighting and ventilation systems. T.L. Tally of Tally’s Broadway assured the public that “germs would have no more use for his house than a mermaid would have for a buttonhook.” So they were all ready to go, just as soon as the Council gave the word.

Elsewhere in the paper, the holidays were just around the corner, and The Hub wanted to help you get ready for Thanksgiving: 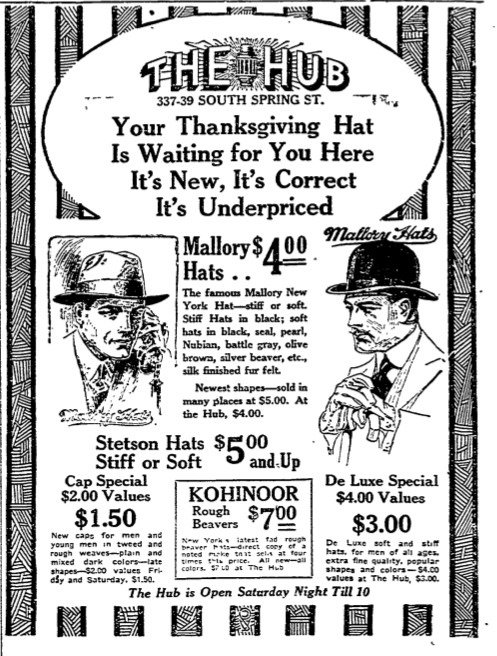 It just doesn’t have the ring of Easter bonnet. If only Irving Berlin had written about it…

* Yes really. Thomas Lyle Sawyer was born in 1881, five years after the book came out but three years before Huck Finn. It was just bad luck—his parents would have had no idea it would become a literary classic.