One hundred years ago this week, Grace Kingsley recorded the patriotic fervor of the times in a movie review:

To Hell with the Kaiser isn’t merely the name of a photodrama. It’s an American state of mind. Therefore it would be absurd to expect any red-blooded American to sit down and write a cool analysis of any picture with that name.

It breathes the very spirit of American pep and dash and optimism. It is like a draught of champagne in a dry town. It radiates victory. Some dyspeptic old critic may take a wallop at it, but he can’t hurt it any. The crowds will go see it just the same…Even the possible pale-blooded old critic, snouting after faults, who may allege the thing’s too episodic, that the “dramatic verities” are not preserved, that the American girl is quite too impossible clever, that the patriotism is flamboyant, will have to acknowledge the play’s got a soul and a soul of flame.

For, not content with bringing events down to date, it soon flies the track of events and soars into the illimitable blue of the imaginable future. And it’s so adroitly done—that moving on from the tragedy of the past to the blinding hope of the future. So that when the story leaps at last into buoyant comedy, it seems quite the most natural thing in the world.

That ‘imaginable future’ involved Kaiser Wilhelm getting captured by the Allies, committing suicide and going to hell where Satan, impressed by his horrible deeds, abdicates in his favor. While that’s an understandable revenge fantasy, it’s hard to imagine it as a comedy. The film is lost, so we can’t see how they managed it. At the time it was extremely popular. The theater had held a preview night for eight hundred soldiers and sailors and they “cheered themselves hoarse” according to Kingsley’s report. Three bands wound up the evening with a rousing rendition of “The Star Spangled Banner.” 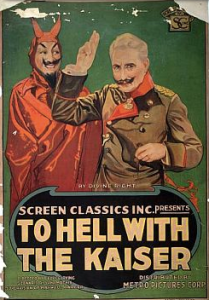 I couldn’t find a record of the box-office returns, but looks like film did well until the war ended in November. After that, Metro tried their best to keep selling it in December: 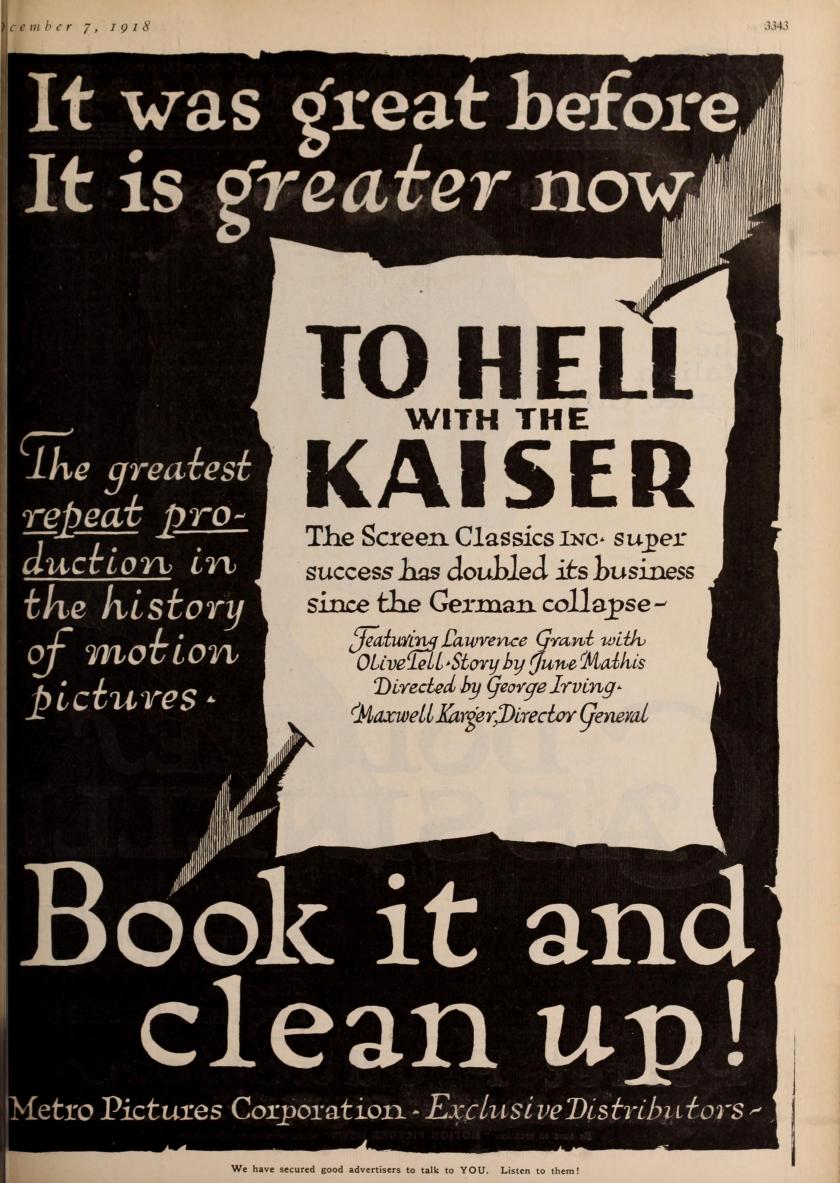 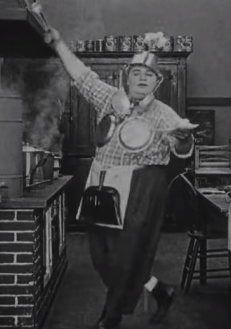 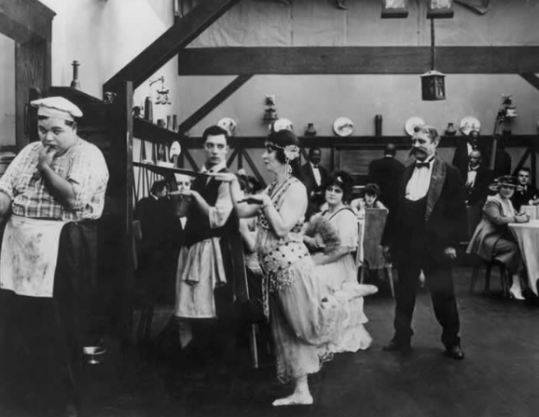 Kingsley had a very good time at another movie this week:

The Cook assays about three laughs a minute—that is, unless you just get one laugh out of it and that continuous. In fact, Fatty put the ho-ho in hokum. There is the Salome dance with Fatty wearing all the scullery furniture except the kitchen stove.

The Salome burlesque was an extremely durable bit of business. Arbuckle and company had first filmed it for The Country Hero in 1917; it’s lost, but from the photos it looks like Buster Keaton performed the Salome role. In The Cook, the dance was contagious – a dancer in the restaurant inspired Keaton to imitate her, then Keaton inspired Arbuckle. This was Buster’s last film with Arbuckle before he left to serve in the army. Keaton next used it to entertain the troops when he was part of the 40th Division Sunshine Players. Then the bit acted as a sort of welcome home from his time in the military when it turned up again in Backstage, Keaton’s return to film work in 1919. It was part of “The Falling Reign” portion of stage show in the short. They used more of the Salome story, with Keaton playing the taunting temptress and Arbuckle playing the king who wants to dump her. 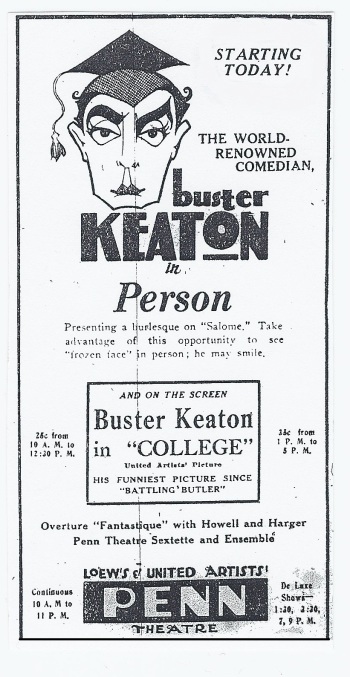 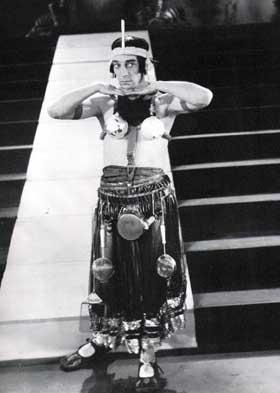 Later, when Buster made personal appearances to support College in 1927, he did it again, calling his act “The Song of the Dance.” Finally he used a version of it in The Hollywood Revue of 1929. Like all good vaudevillians, he didn’t let proven material go to waste. No matter which version you see, it’s still a hoot. 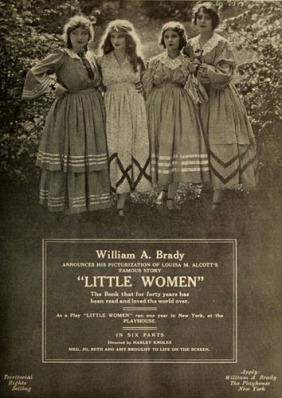 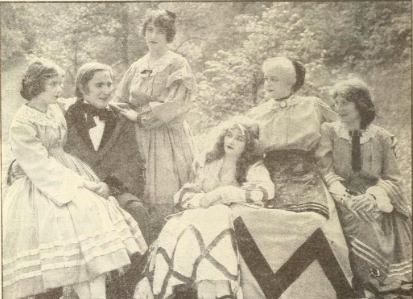 Kingsley reported big news for people who know that Christmas won’t be Christmas without presents:

Louisa M. Alcott’s Little Women, that classic of girlhood’s library, is to be made into a film, after all, despite the difficulties W.A. Brady had in securing screen rights. Mr. Brady will make an elaborate production of the story, on which work has already commenced. The scenes are being made in Concord, Mass., in the very house sacred to the memory of Meg, Jo, Beth and Amy.

William Brady, a very successful theatrical and film producer, had presented it as a play during the 1912-13 season, so he was familiar with the material. This was second of many, many film adaptations of the novel (the first was a 1917 British production). From the plot description in its Paramount Press Book, it looks like Jo still sacrifices her hair and Beth dies, but Amy doesn’t burn Jo’s manuscript (the worst crime in girls’ literature!) and Jo doesn’t try out independence and move to the city – Prof. Baer already lives in Concord. They really did shoot some of it in Orchard House, so it’s particularly sad that it’s a lost film. If you’d like to see what the rooms look like now, the Alcott Museum has a virtual tour.