One hundred years ago this week, Grace Kingsley noted that an unusual documentary film was still playing:

Birth seems in for a run at the Majestic, the third week commencing yesterday. Women are intensely interested in these vital facts of life as portrayed in the film, and while a few may come out of morbid curiosity to view the scene wherein a life is brought into the world, most of them go out of a real desire to learn how to care for the youngsters that are theirs or that they hope for.

She had gone into more detail in her initial review on November 5th:

Oh screen, what thrill is there left for you? Yesterday at the Majestic, a crowd of women which packed the theater gasped as they witnessed a real birth on the screen! It was no half-lighted affair, either, but a whole breath-taking business in a clear light…Despite the frankness of the film, there is, after all, nothing revolting about the picture, at least, to a woman, for, after all, it is merely a part of the great drama of nature. In fact, the whole thing is only a common sense revelation which it will do no harm to any woman to view.

The film’s advertising did emphasize the sensational scene, but all of the reviewers agreed with Kingsley: it was primarily an educational film. Keeping men out seems to have been a successful promotional gimmick. After a few days into the Los Angeles run, the theater allowed the audience to vote on letting men in; they overwhelming voted “yes” so men were admitted but they had to sit in the balcony.

In 1917 there were no restrictions on showing childbirth on film; that wasn’t forbidden until the Motion Picture Production Code went into effect in 1930. In 1938, there was a much bigger fuss among censors over a similar film, Birth of a Baby, a documentary mostly about prenatal care. Despite being endorsed by the AMA, the YWCA, the U.S. Public Health Service and Eleanor Roosevelt it couldn’t get a seal from the Hayes Office and it was forbidden by some city and state censorship boards. 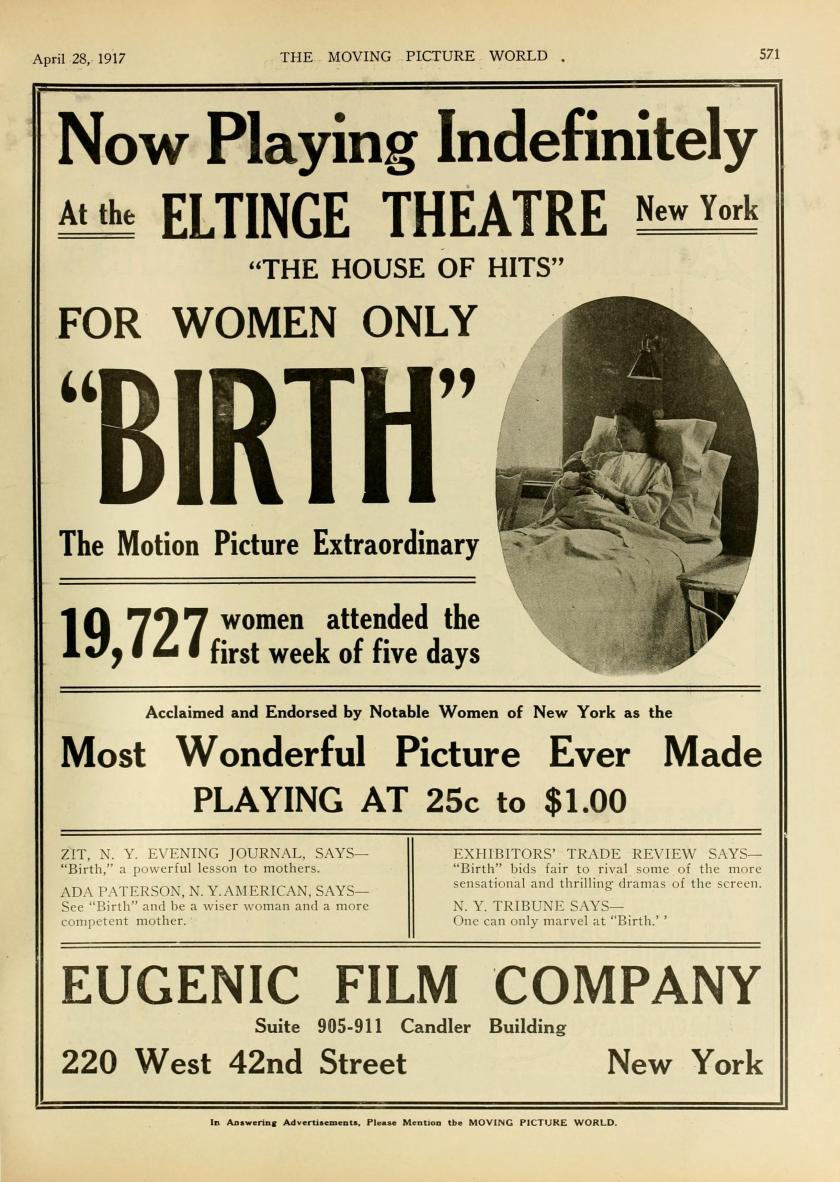 Now every episode of Call the Midwife presents realistic-looking childbirth scenes, but something about the film that Kingsley didn’t mention is much more disturbing: it was made by the Eugenic Film Company. The eugenics movement wanted to make “better babies.” If their goal was to improve infant health through excellent pre- and postnatal care, as Birth advocated, that would have been great. However, they strove to improve humanity through selective breeding and prevent “the unfit” from reproducing. It led to compulsory sterilization laws that mostly affected poor, nonwhite and mentally disabled women. California was a leader; by 1921 80% of all forced sterilizations were happening here. The movement is mostly now associated with inspiring Nazi death camps. 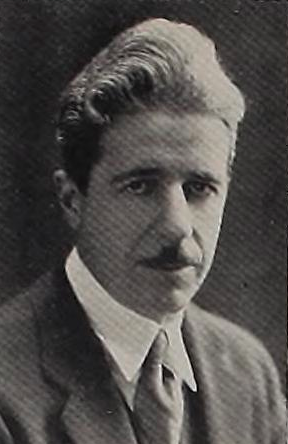 Kingsley spoke to director Chet Whithey, who was “fervently glad to be back on the western Broadway,” because studios in New York were more crowded and photographing on the streets was nearly impossible. He said, “it all resolves itself into tipping the cops with one hand and keeping you limousine-enclosed camera away from the crowd with the other. The wealthy people are not so nice about permitting their property to be used as are the western millionaires.”

Despite the problems, he had gotten good results and his film Nearly Married was Kinglsey’s favorite this week. An “airy soap bubble of comedy,” it involves a divorcing couple trying to reconcile, but they’re thwarted by a professional co-respondent, legal quirks and other complications. She thought, “all the honey of humor has been extracted from the comedy flower.” It’s been preserved at the Library of Congress.

Brownie Vernon told Kingsley a story about her the hazards of shooting on location in downtown L.A. for Fear Not. She needed to make a costume change, so she ran into a building.

She went into a back room, empty apparently except for some long cases, and locked the door. As she proceeded to dress Miss Vernon’s eyes became accustomed to the light, she also discerned there was an odor of drugs in the place, and then glancing around she discovered a man lying in one of the cases. This was awfully embarrassing to Brownie. Then she saw another man occupying another of the boxes. She was blushing a deep crimson by this time. Suddenly she realized that all these men were ‘dead ones’!

Without any lost motion whatsoever she seized her garments and tore out of the gruesome place. The other members of the company, waiting outside, caught only a fleeting glimpse of the young actress as she dived into a nearby limousine. There were no dead men in the machine—but neither were there live ones—and Brownie completed her toilette in the car she usurped.

At first, she thought she had discovered a wholesale order of crime, but on going around to the front door of the house she had invaded the mystery was quickly explained. A sign in the window read: “Blank and Blank, Undertakers.”

Modern actors with trailers to change in have no idea. This didn’t put Agnes “Brownie” Vernon off of adventures; a few years later she moved to Australia to make a few films in their nascent industry.

Kingsley had a report about another star’s challenges at Balboa Studio from the set of A Country Hero:

“Fatty” Arbuckle had two chairs and an upright piano broken over him while carrying on a stage fight with five men. But as “Fatty” is his own director and instigator of most of his own film troubles, he has only himself to blame.

Anything for his art might have been his motto. A Country Hero is a lost film, but a contemporary review says there’s a scene with lots of furniture getting smashed, including a piano. Lea at Silent-ology gives a round-up of what’s known about the film.

Kinglsey’s best line this week was in a review of A Painted Madonna: “according to moving pictures, a girl has only to make up her mind to lure men to their doom and to get a lot of money while she is about it, to have the thing an accomplished fact.”

So there was a second educational movie playing in Los Angeles this week! Here’s some trivia: the woman who played that painted Madonna was billing herself as Sonia Markova, a Russian actress. She was actually Chicago-born Grace Barrett, who usually acted under the name Gretchen Hartman. She’d been acting in films since 1911, but some of the press bought her temporary name change. She married actor Alan Hale in 1914, and they stayed married until his death in 1950. They had three children, including Alan Jr. Yes, the Skipper’s mom once lured men to their doom.