One hundred years ago this week, Grace Kingsley reported on some optimistic studio plans:

If those enterprising Culver City people have their way, motion pictures are due to break out in a new place, and switch the map of Alarm Clock Alley* from Hollywood to Culver City. Several of the larger companies are considering removing to that thriving locality, and special inducements are being offered to them. The New York Motion Picture Company, under the management of Thomas H. Ince, was the first to build a great and substantial plant there. The Essanay has opened a studio in another part of town, and is working several companies, while half a dozen corporations whose names are withheld for the present are dickering for sites. Already three large companies hold options on ground, with deals expected to be closed this week.

What’s astonishing about this announcement is that Culver City was only three and a half years old. Harry Culver, a real estate developer, officially opened it in October 1913, and it was incorporated in September 1917. Los Angeles was growing by leaps and bounds.

Culver City did become a motion picture center, but not the center. As Kingsley mentioned, Thomas Ince opened Triangle Studios there in 1915. Essanay took over Max Linder’s studio, but they soon went out of business for the same reason that all of the other big plans came to nothing: the economic turmoil caused by the war and influenza epidemic.

After the war, business picked back up. In 1918 Ince/Triangle Studios became Goldwyn, which became M.G.M. and is now Sony Entertainment. In 1919 Ince opened a different studio, which became DeMille, then Pathe, then RKO/Pathe Studio, then Selznick International, then Desilu, and now it’s a rental studio run by a private investment group. Hal Roach built his studio on Washington Blvd. in 1919 and stayed in business there until 1963. 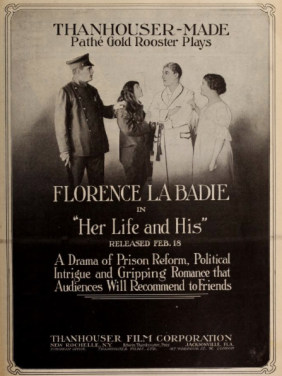 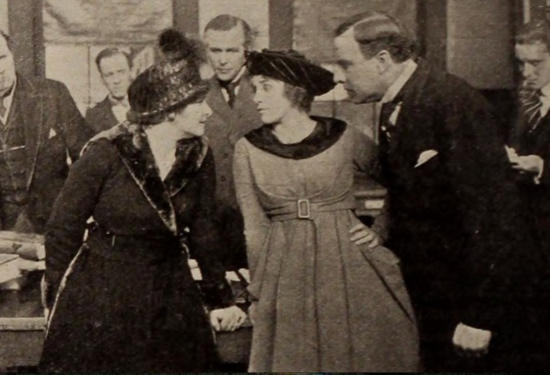 Kingsley’s favorite film this week was Her Life and His:

which crackles and sparkles with keen plot, swift action and absorbing character study…While the long arm of coincidence may be said to be yanked rather farther than usual in the scene in which the girl, just released from prison, views through the window the man who wrongfully sent her to the penitentiary, about to suicide, and enters in time to prevent him killing himself, still it’s a scene that makes you catch your breath. There are many plots and counterplots—too many to recite here, but they have novelty, and real ingenuity.

That former convict and suicidal man go on to form a partnership to improve prison conditions until a corrupt political ring tries to blackmail him. She comes to his rescue and they live happily ever after. It’s a lost film.

The film starred Florence La Badie, whom Kinglsey thought had “brains, sincerity and a vividly expressive face, and these register even more effectively than mere beauty. Besides, she’s pretty enough for all practical purposes.” Ouch! LaBadie was Thanhouser Films’ biggest star, appearing in their major productions including their 1914-15 serial The Million Dollar Mystery and The Woman in White (1917). She died just a few months later on October 13, 1917 of septicemia two months after fracturing her pelvis in a car accident. You can find more about her at the Thanhouser site.

Oh noes, my foot is 9.5 inches long–I’ll never be perfect. 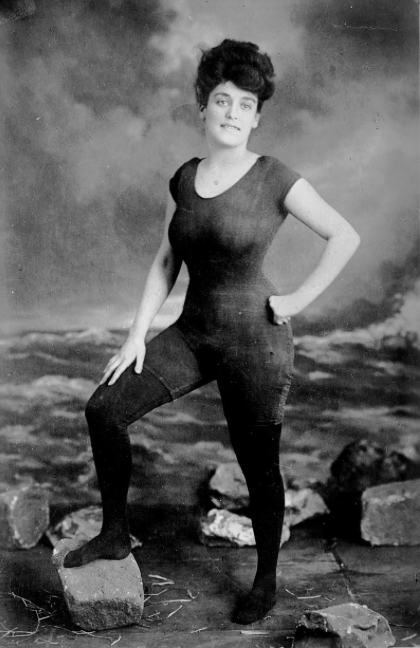 This week the film page featured a new and different way to make women feel inadequate. An ad for the upcoming A Daughter of the Gods gave far more information than anybody needed about Annette Kellerman’s precise dimensions, concluding that’s what was necessary to be the “perfect woman.” However, the man who declared in 1910 that she was perfectly proportioned, Dr. Dudley Allen Sargent of Harvard, wasn’t just a nut using a “scientific study” as an excuse to measure a lot of young women and pass judgment, he was also an advocate for women’s exercise and an end to tight corsets. An interview with him can be found at the Sunday Magazine blog.

Kinglsey didn’t review the film, but an anonymous Times writer praised Kellerman’s expert swimming and diving and didn’t mention what the lost film is known for now: the first nude scene by a major star.

* Alarm Clock Alley was Kingsley’s nickname for the motion picture colony, because everybody had to get up so early for work. It didn’t catch on.